The Minister of Trade and Industry Dr Rob Davies has gazetted the Amended AgriBEE Sector Code for implementation by entities in both public and private sector. Minister Rob Davies says that the sector code will serve as guidelines for transformation of the agricultural sector. It replaces the old AgriBEE Sector Code which was gazetted in December 2012.”  The Minister says that agriculture is bedrock of our economy and a very important contributor to its development. “This is evident by the latest 2017 third quarter Statistics on Gross Domestic Product which shows that agriculture production has risen by 44.2% and was the main driver of the  2% GDP growth of the third quarter” states Davies.

The scope of application of the Amended AgriBEE Sector Code includes:

Minister Davies adds that generally targets of the Amended AgriBEE Sector Code are higher than the ones of the Generic Code.

“One of the key highlights of the Amended AgriBEE Sector code is an increase of the target for supplier development to 3% of Net Profit After Tax (NPAT) (which is higher than 2% of NPAT of the Generic Codes).  The aim is to create a pipeline of black suppliers and black industrialists within the value chain of the South African agricultural industry,” indicates Minister Davies.

According to Minister Davies, the Amended AgriBEE Sector Code is recognising initiatives that will enhance the sector.

“In addition to strengthen the drive towards creating black suppliers, black commercial farmers and black industrialists, enhanced recognition is given to initiatives that result in Greenfield ventures, job creation and beneficiation of primary products, support for land reform projects, and support for localisation of goods and services not being produced in SA currently,” says the Minister

Furthermore, and in support of land reform process,  the sector code make a provision for thethat the current owners of land to transfer at least 30% of productive agricultural land to black people under the ownership element. The 30% land ownership target is not static and therefore it shall be reviewed from time to time.

Minister Rob Davies urges all entities, Verification Agencies, associations, sub-sectors organisations and unions in the agricultural sector to report annually to the AgriBEE Sector Charter Council on their B-BBEE status and transformation achievements. The AgriBEE Sector Charter Council is the body that has been appointed by the Minister of Agriculture, Forestry and Fisheries to monitor implementation of this sector code. 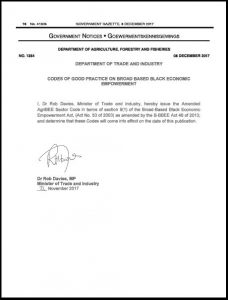