Auditing and accounting firm SAB&T BEE Services (Pty) Ltd and Shameema Ismail have issued a public apology after the Broad-Based Black Economic Empowerment (B-BBEE) Commission made non-compliance findings against them.

“The B-BBEE Commission has issued final findings against SAB&T BEE Services (Pty) Ltd and Ms Shameema Ismail for conduct that is improper, contrary to ethical conduct expected from a verification professional/agent, the standards applicable to verification and the objectives of the B-BBEE Act, and may amount to misrepresentation or attempt to misrepresent the B-BBEE status of the measured entity, for issuing two B-BBEE certificates for two periods (2014-2015 and 2015-2016) but using the same set of financial statements,” said the Commission on Tuesday.

This follows a complaint by Keith Levenstein against the company and Ismail who is a verification professional within SAB&T BEE Services (Pty) Ltd.

Following due process, the B-BBEE Commission made findings against SAB&T BEE Services (Pty) Ltd and Ismail and recommended remedial steps including, issuing of a public apology, commissioning an independent audit of all certificates issued for 2014 to 2016.

The commission also recommended that the parties refund all entities in which the same improper practice was used in verifying these entities, failing which SAB&T BEE Services (Pty) Ltd and Ismail would be referred for criminal prosecution and to South African National Accreditation Systems (SANAS) and the Independent Regulatory Board for Auditors (IRBA) for their de-registration.

“A verification process is critical to properly reflect the extent and level of transformation of each entity, and manipulation of financial information that ought to be used to conduct this process will not be tolerated. Using the same financial information for two consecutive years is tantamount to misrepresentation and undermines the objectives of the B-BBEE Act,” said the commission.

“The fact that this conduct was done to avoid the coming into effect of the amended codes, indicates a clear disregard of the B-BBEE Act by the verification agency and professional.”

Both Ismail and the company have issued a public apology on their website for this conduct and have agreed to refund all entities verified in 2014 and 2015 using the same approach, amongst other things. 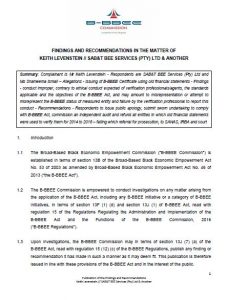 The commission has the ability to address fronting, as well as to introduce mechanisms to prevent it from happening.

The B-BBEE Commission effectively commenced with its operations on 1 April 2016.