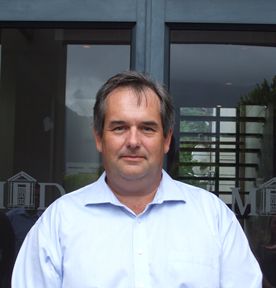 After matriculating from Rondebosch Boys High School in 1981, Dave read for a B. Comm at the University of Cape Town where he graduated with distinction in financial management in 1985. He continued his studies towards his CTA, during which time he was employed by the University as a part-time lecturer.

He articled with the Cape Town firm BDO Spencer Steward and passed his qualifying exams on first attempt in 1987. On completion of his articles, he was admitted as a Chartered Accountant (SA) in 1989. Dave then gained further experience through a secondment to the London firm of BDO Binder Hamlyn. On his return to South Africa, he worked for the Cape Town office of the South African Revenue Service.

Subsequently, he was the Financial Manager for Spar Western Cape , during which period he began consulting to various retailers. In 1997 he decided to concentrate on the provision of consulting services to small and medium entrepreneurs and thus accepted a Directorship with MD.

This experience had ideally equipped Dave within his core focus of consulting in tax issues, business advisory and general consulting services.

He has also served on Audit Committees of Medical Aid societies, provided expert witness testimony in commercial cases and written various articles on his specialised focus of profit maximisation in the voluntary trade/ franchise sector.

Dave Rich has recently become involved in the Business Turnaround Process as a Business Rescue Practitioner. Currently such appointment is granted on an interim basis by the Companies and Intellectual Property Commission (“CIPC”) and only relates to a specific client. Final licenses can only be granted after the CIPC has concluded their licensing procedures but in the interim financially distressed businesses may appoint Dave Rich to be their Business Rescue Practitioner.

Dave identified the strategic importance of a commitment to Broad-Based Black Economic Empowerment early on in the partnership. The practice has thus always endeavoured to align its activities and policies to these principles. Dave provides consultative services on empowerment and has written two articles, published in several magazines on SMME’s and B-BBEE.

Dave is also a member of the following professional bodies: